“…a beer carried quietly three miles is better than one shot across three thousand on a fast freight.” M.F.K. Fisher

The hot, hazy, lazy dog days of summer are here. Even food and beverage lovers need a break. Because drinking can be really strenuous sometimes… choosing the proper glass, finding a corkscrew in your junk drawer, decanting, it all requires effort and forethought.

Enter beer + sausage: the ppsshhooott sound that comes from cracking a cold one almost makes you feel cooler instantly. Bottle opener and glass optional of course. Before the days of screw caps there was always “that guy” at the party who could open the bottle with the counter top, a lighter, a Swiss army knife or even his teeth. The perfect partner for this beverage: sausage. On a bun, no need for a plate, heck you can even eat it piping hot off of a stick. Ketchup and mustard dripping down your chin? No worries if you don’t have a napkin. Now is the time for a quick dip in the pool.

So, get your grill on and wash it down with a cold one!

Given our laid back summer vibe, we wanted to avoid the usual sausage/fire pitfalls.  Charred exterior/raw interior, ruptured casings, eyebrow scorching flare-ups and worst of all, the dreaded dry dog and dry, mealy texture.  Our highly scientific method involves a glug for you and a generous three glugs for the pan.

We charred our sausages, immersed them in a warm beer bath and then finished on the grill to further caramelize. 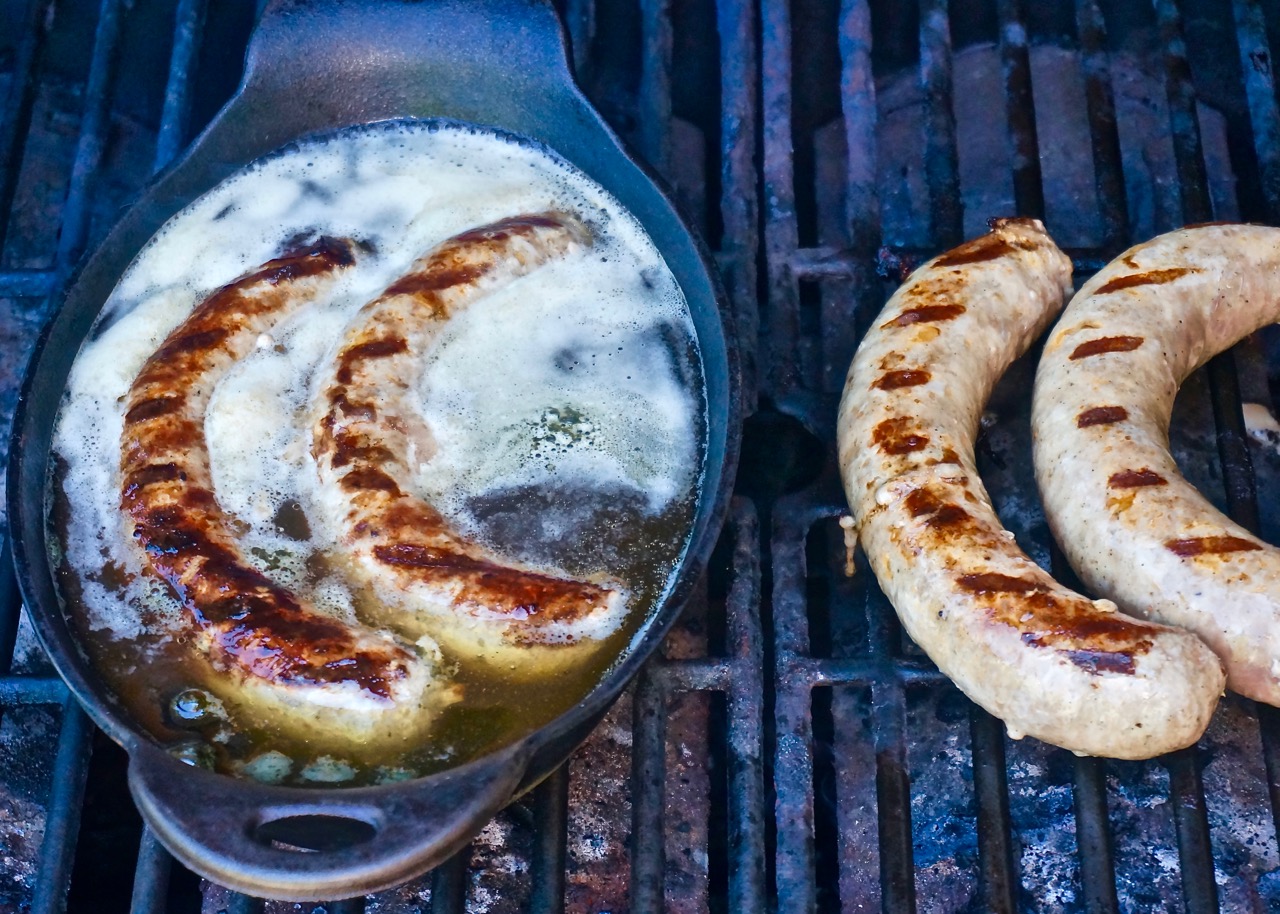 for the pickled mustard seed:

what we chose to pair and why

Sausages are rich, fatty, salty and savoury and demand a crisp, clean, bubbly beverage to cut through and cleanse the palate.

M.F.K. Fisher said it best: “a pleasant aperitif, as well as a good chaser for a short quick whiskey, as well again for a fine supper drink, is beer”

Just like the tasting notes say, the Pound Galena from London Brewing Co-op is ”a nice easy going beer, cause why should beer be stressed.” This is your first out of the gate beer: it’s what you drink while munching on pretzels and figuring out what to put on the grill.

We enjoyed the Amsterdam Saison: it was creamy, mouth filling, smelled like farm fresh cut hay. This summer sipper is what you drink while waiting for the sausages to cook. After all…the Saison style beer was originally brewed to quench the thirst of the farmhands while working!

Our IPA was Great Lakes Brewery Tank Ten series Octopus Wants to Fight. How fitting. It was by far the knockout winner for this sausage beer battle. The 8 varieties of hops and 8 types of malt plus a refreshing 88 IBUs (International Bitterness Units) could clearly battle it out with all of the flavours we had going on in our sausage.

Our Beer…
Deferring to beer no longer looks like you are intimidated by the wine list. Beer lovers rejoice! Craft beer has taken our palates by storm and is no longer an afterthought. There has been an explosion in craft brewing that is ever expanding. Here in Ontario, the Craft Brewers Association, has over 60 members and the Ontario Brewer’s Directory lists 184 small independent breweries. It’s hard to drink bad beer when so much choice abounds!
Gone are the days where bigger always meant better. Returning to our roots has created a go local revolution from the field to the bottle.

From their Tank Ten Series. Limited release beers….their brewers are given the ‘green light’ to brew whatever they like. Check out their website or go to the LCBO to see what they’ve been up to.

IPA’s are flavourful and refreshing with bold aromas and flavours that call for similar characteristics in food pairing.

IPA’s or India Pale Ales were originally brewed to travel from Britain to the colonies of Southeast Asia. To preserve the brew for the long journey, the beer was brewed with higher levels of alcohol and extra hops were added.

IPA’s are a hop-forward style featuring a noticeably high IBU or International Bitterness Units. Found on most bottles and cans, this number is a quantifier of the bittering compounds found in a beer. Our IPA is a whopping 88 but is not just for hop-heads. The beer is blended seamlessly; the hops adding a grassy, grapefruity freshness that rounds out the malty sweetness.

London Brewing Co-op’s Brewer’s Manifesto is to source the finest local and organic malts and hops available. A truly local beer….from ‘plough to pint’, the co-op works with small scale farmers and produces great beer with sustainability a primary priority.

The Pound Galena is a local single hopped beer with a touch of grapefruity aromas a flavours. IBU’s are at a nice, easy going 36.

London Brewing Co-op is located in The Root Cellar Organic Cafe which also serves their tasty brews on tap. Don’t miss out on the monthly pop-up shops where you can grab a growler or boston round of their latest brews. Check out  https://www.facebook.com/LondonBrewing to keep up to date.

The result is a fruity, easy drinking summer sipper with spicy aromas, spritzy carbonation and a slight yeast haze. IBU’s are at a moderate and refreshing 35.

Saison is a Belgian style beer that was brewed at the beginning of winter in farmhouse brewery to quench the thirst of the farmhands who would work the fields the following summer.

Beer enthusiasts who want to quench their thirst for knowledge should check out https://bensbeerblog.com/

Ben Johnson was voted ‘The Best Beer Writer in Ontario’ at both the 2014 and 2015 Golden Tap Awards.

We love his version of the ‘Proost Questionnaire‘ for people making and working in the Ontario beer industry (ha ha ha proost is Dutch for cheers).

His Haiku Reviews…a poetic 17 syllable review of a beer, are clever and witty.

Like a good friend…we are just trying to push you outside of your comfort zone.

Live a little and expand your palate.

After 10 years as a restaurateur, culinary instructor and caterer, a trip to France sparked an untapped enthusiasm for all things wine.  I gave up the restaurant life,  made a huge u-turn and dove head first into the vast world of wine.  I have never looked back and achieved my Sommelier certification with the Canadian Association of Professional Sommeliers in 2015.  I love sharing my pursuit of the perfect pairing in a fun, unfussy and ultimately delicious way with my friends, family and those I teach.

I graduated from the Stratford Chefs School in 1999 and achieved Red Seal Certification shortly thereafter. With this strong foundation laid, an opportunity to spend time in California presented itself. While there, I was intoxicated by the seasonality and quality of the ingredients everywhere I looked. This experience proved to be a turning point for me in how I thought about food. It inspired me to have a deep and enduring respect for the people, food and culture that go into the perfect dish.